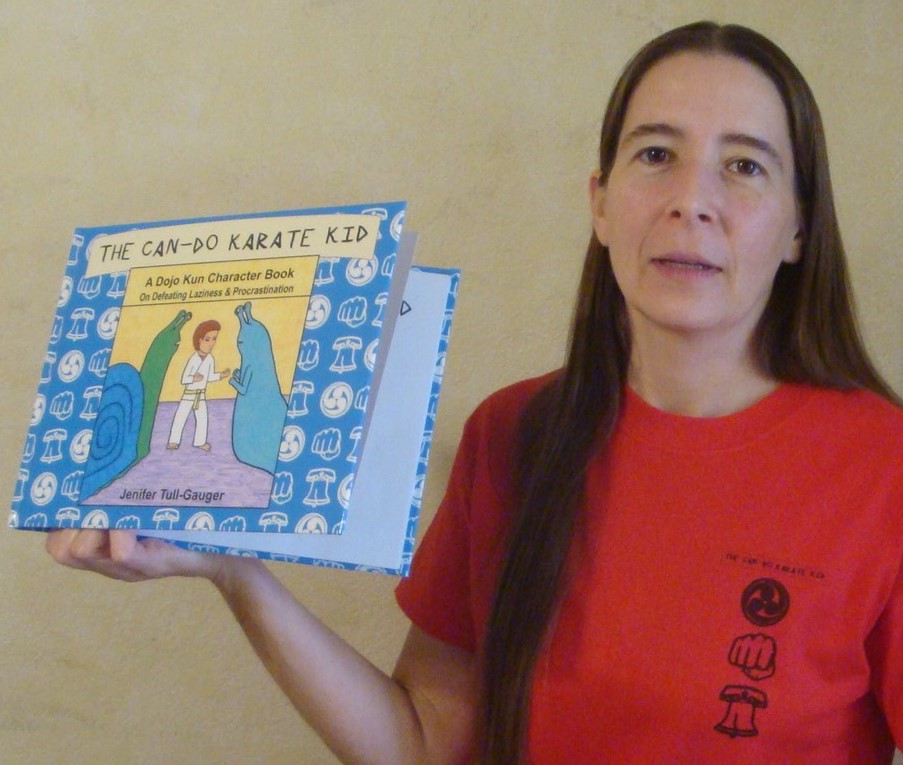 Someone asked me why I have the Liberty Bell as one of the symbols on the cover of my debut karate children’s picture book. It was not random or an accident. I thoughtfully and purposefully chose that symbol. It is only one aspect of “The Can-Do Karate Kid” cover symbolism. Join me as we explore this symbol on the cover and what it represents.

Below are some early versions of cover ideas for my book as I was developing it. You can see that it has improved a lot. I liked the idea of repeating symbols for the overall cover background. I knew I wanted three symbols because that is a good number. There are three elements to our karate muln (more on that symbol later). Three is an auspicious number in both eastern and western cultures. Repeating only two symbols wouldn’t be enough. And four or more seemed too busy and cumbersome.

I knew that I’d be using the muln and the kempo fist on “The Can-Do Karate Kid” cover, to commemorate my style of karate. But I wanted to recognize that I am American; so are my karate teachers.

plus, my dojo is in the United States, so that country has an influence on my living art of karate. Not to mention that we have the American flag up in our dojo in a place of honor. And as I tell new kids, we use that to show respect for the people who have given their lives and their time to give us our country and our freedom.

Why the Liberty Bell for “The Can-Do Karate Kid” Cover

I had a vague image in my head of the pattern repetition for “The Can-Do Karate Kid” cover. I knew the three symbols must be roundish to fit the image in my head. So I started looking into roundish symbols for America. Obvious symbols for America were the flag, the bald eagle and Uncle Sam. But they were not round enough. To fit with my design, I also needed something that could be depicted with simple lines. A star could work, but that evoked too much Texas and not enough United States in general. When I saw the Liberty Bell, I knew it could work aesthetically. I researched the history of the Liberty Bell, and I loved this symbol even more.

My Dojo Kun Character Books are very much about traditional karate and its lessons. They are also about American kids using those lessons to improve their own lives. So it is fitting to recognize their country of origin as well as the country of origin of the book. That is in addition to the kingdom of origin of karate. I’ll tell you more about the rest of the cover symbolism another day.