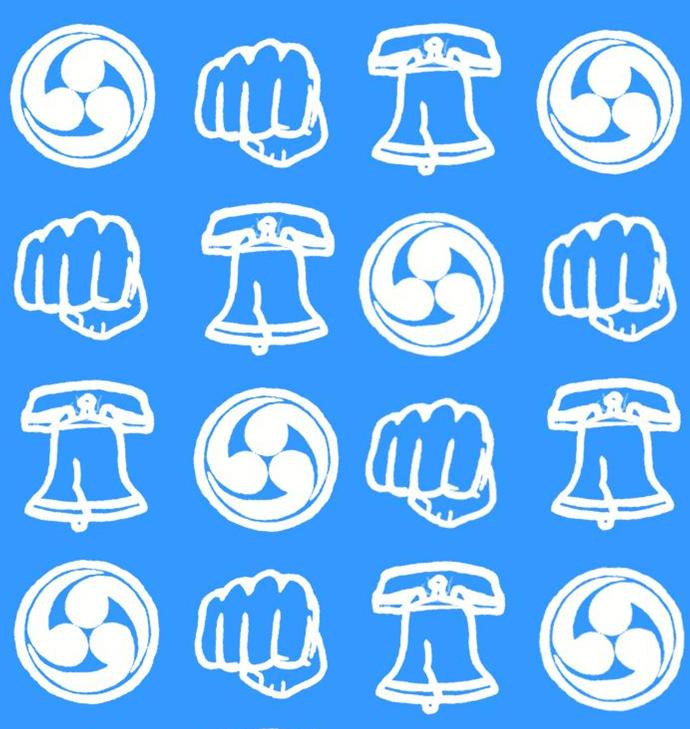 What is this Symbol for Ryukyu?

The name for this symbol for Ryukyu is the mitsudomoe (not to be confused with the gag manga series). Mitsudomoe has a literal meaning of “three comma-looking shapes.” The Ryukyu island chain makes up what used to be an independent country called the Ryukyu Kingdom. The Ryukyu people developed the martial life protection arts. Later, the Japanese named this art karate. The Ryukyu Kingdom, now a part of Japan, has also been renamed. It is now called Okinawa. Today, the mitsudomoe symbol for Ryukyu is fairly well-known and widely accepted as a symbol for Okinawa.

My personal experience with this symbol was when we visited Okinawa. A man in his early 20s who was an Okinawa native was very touched to see us Americans with the symbol for Ryukyu on our shirts in the heart area. We had major communication barriers so don’t know what he was thinking. However, an associate, Depue Renshi, lived in Okinawa for many years and had similar experiences. In his time there, he found out why some natives appreciated seeing this muln on his shirts. He understood that they appreciated us recognizing the old Ryukyu Kingdom. This symbol gives respect to their roots and their heritage.

History of the Mitsudomoe

Kaicho’s teacher told a story of this symbol which commemorates a Ryukyu king’s right hand man, Zana Yakata. When Japan took over the island, Yakata became a martyr due to his loyalty to his king and his country of Ryukyu. At that point the mitsudomoe became a sign of national pride and remembrance of their old kingdom which was taken over by force. Other than Yakata and two others, the king opted to accept the rule of the more powerful country and saved all the rest of their lives.

But in researching this symbol, it goes back to before that story. There is an account of this symbol for Ryukyu appearing on a coffin around the year 1500. That supports the research finding that it was used before this to symbolize Hachiman, the Japanese god of war. Many listings report the mitsudomoe as a symbol for Shinto, representing three parts of the world. That may be so, but the comma shapes have been found in Japanese culture as far back as 1,000 B.C. These are called magatama. We don’t know what they represented long ago, but they look very much like the parts of the Asian yin yang which represents balance.

The reason I chose this muln or symbol for Ryukyu for my book cover is because it specifically represents the martial arts from the Ryukyu Kingdom. That is what I train in and teach. It is the symbol for our dojo and our art which has given me so much. The Ryukyu Kingdom is where the Dojo Kun, as well as karate, originated. My karate children’s picture book is steeped in this culture, so I am happy to represent it on the cover.

Illustrator’s Block: The Struggle is Real

Launching a New Children’s Book that Teaches about Respect