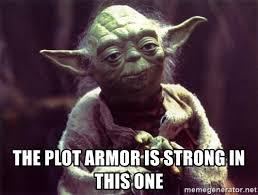 Several weeks ago, I went over a lot of writers’ terms in my acronyms blog. I recently learned a new term for writers. It is also used in discussions of TV shows, movies and video games. The concept is not new to me, but the phrase is. It’s plot armor.

What is Plot Armor?

In the past, I have associated the concept of plot armor with typical American stories. It exists in both novels and Hollywood productions. As a general rule, the good guy always survives. He’s inexplicably indestructible and/or super lucky, so even though he may encounter un-survivable situations, he still survives. Additional to that, for the majority of American writers, the good guy always wins.

In contrast, I’ve noticed that with European movies and stories, anything goes. You never know what to expect because the protagonist can die and the good guy can lose. As a writer, I feel that is more natural and more true to life’s circumstances.

I love the “love always wins” approach of Dean Koontz, one of my favorite authors. However, I do also like the pull of the unknown when you don’t know where the story will take you until the author or screen writer gives the destination. The thing I like least, though, is when they stop the story or movie short, without a conclusion, basically letting you imagine the outcome you’d like. I prefer to let the storyteller tell the whole story from beginning to end.

Plot armor is not just for movies and video games. It exists in novels and stories. Which brings up a good question for writers: how much is too much? It’s important not to take advantage of readers and push the story’s plot too far into the unbelievable.

Like my grandmother used to say, “You learn something new every day.” I recently learned of plot armor and just had to share this phrase with you. I wonder if it was new to you…