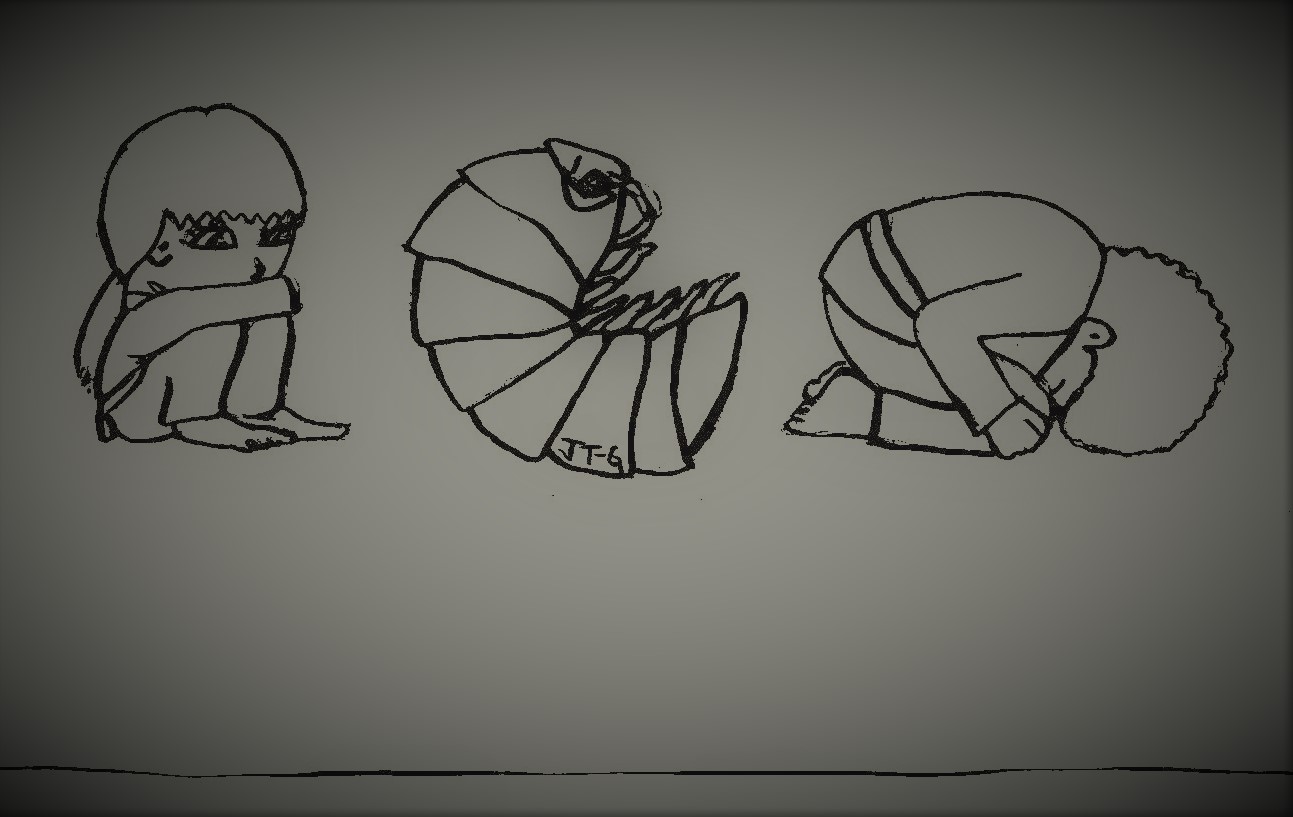 Once, again, I am living what I’m illustrating and writing about. My life is imitating my art. I have struggled mightily to illustrate my third children’s karate picture book. This one is about wrestling with the quitting monster.

Quitting is a size-changing roly poly (a.k.a. pill bug). In the story, the karate girl Michi and karate boy Makoto really want to paint a mural, but for one reason or another, they keep falling under the influence of Quitting. And then they decide to quit…until they rally, fight off Quitting, and move forward with their project.

In my life, I was doing fine continuing on my path of a karate instructor while also getting in the groove of creating a picture book series. That includes writing, illustrating (with much time, effort and struggle), marketing, promoting and selling my books.

The Quitting Monster Rears its Head

In March, my first really big book fair where I was to promote my books was coming up. That’s the Tucson Festival of Books, one of the biggest in the country. Additionally, there were some karate events where I was going to bring my books. I was looking forward to promoting my first two books while finishing my third one. The quitting monster was well under control – not even in my sights.

Then they decided to cancel the Tucson Book Festival because a lot of the presenters were backing out (due to fears of the novel coronavirus). The media was blowing up everyone’s fears of this new enemy. Nobody really knew what was up, and most erred on the side of caution, just to be safe. That was how it all began for me.

You know the rest (don’t you?): governors shutting down states, leaders shutting down countries, the news outlets feeding on an inflating everyone’s fears while not giving many real facts. A lot of contradicting information being strewn about. All events cancelled. People afraid to go out of their homes or be around other people.

How This Affected Me and my Book Creation

For me, that meant our dojo, which is a huge part of my life (and will continue to be), could no longer sustain having a nice, large, dedicated location. And the current state of our society made it so that we could do nothing to try to keep the location – at least nothing practical, sensible or financially feasible. So we have been in the process of selling most of our items, moving out of a space we have been in for over eight years, and restructuring the training model that we have been teaching in for nearly 20 years.

Add on to that, losing a mentor and losing a best friend. And I’ll describe my role in our at-home schooling as taking on the role of guidance counselor and academic advisor. Oh yes, and learning to teach karate online – which for me has had a bumpy learning curve.

As I have been going through all of that, I have struggled to make the time to finish illustrating my third book. It would be so easy, in regards to illustrating, to just roll up like the quitting monster roly poly, into fetal position, pretend the project didn’t exist, and just quit. So easy. Just stop, just for now, it’s so nice and dark and safe and comfortable to hide in a little pill bug ball. Isn’t it easier to do that any time life throws obstacles in our way?

But Makoto and Michi don’t settle for that. They go through the hard work of fighting back, of wrestling against the quitting monster. They might be overcome for a while, and roll over and quit. But they don’t stay there long. They get back in the fight and try and try again to make more progress on their mural project. I will proceed like them.

This third book has been the most difficult to work on illustrating regularly, because of all I mentioned above. It has been stop-and-start-again. And by coincidence, it is the one book in the series about wrestling with quitting. My life is imitating my art again, as it was when I wrote in this blog. At least I, like Michi and Makoto, have my karate training for strength and life skills. That training and those skills includes using the Dojo Kun for guidance and encouragement. Those traditional Okinawan martial arts skills can help me through anything, and that includes personal struggles through hard times.

KARATE WITH YOUR DOG & LAUNCH PARTY