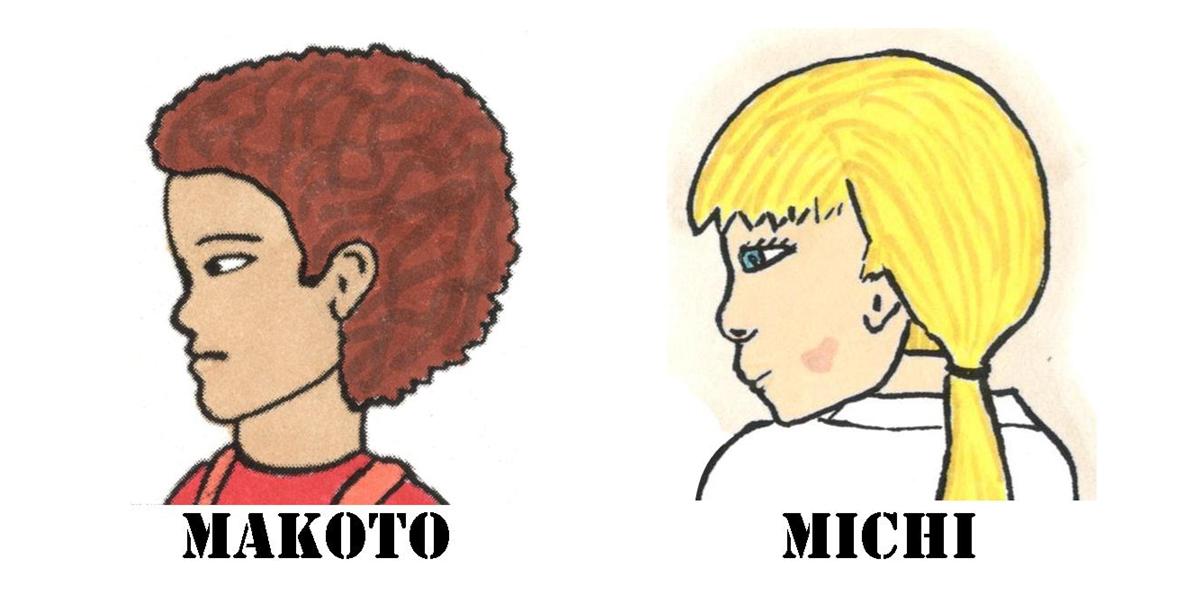 In the first one of my karate picture books, “The Can-Do Karate Kid,” our boy Makoto is well acquainted with Laziness and Procrastination. They start out as his constant companions. His good friend from karate is a girl named Michi. Today all four of them are going out to sushi and you are welcome to tag along. Of course there are parents involved, but we are here to see our main characters. And Makoto wants you to get to know Michi a little  better, before she makes her main appearance in my second karate picture book.

As you can see, Laziness is a blue slug monster and Procrastination is a blue and green snail monster. They are relatively harmless companions for just one lunch with friends. Just like in the first one of my karate picture books, these two come hand-in-hand. That’s because Laziness never puts much effort into anything and Procrastination always puts off things that need to be done. He likes to tell Makoto, “Don’t do it now; you can do it later.” I figure the worst thing that can happen from bringing them along to lunch is taking an extra long time to decide and order and eat. But it’s summer vacation, so no harm done.

Since Laziness and Procrastination are soft-bodied gastropods they love damp, temperate weather. So they both order water without ice. Then Laziness, for his main dish, asks for a double order of seaweed salad. Damp, juicy vegetables are right up his alley and this guy likes to eat. Procrastination likes succulent veggies too, but he gets the house salad with lettuce first and follows it up with a cucumber salad for his main dish.

MAKOTO: PROTAGONIST IN THE FIRST OF MY FIRST KARATE PICTURE BOOKS

Both Makoto and Michi are the main characters in my series of karate picture books. But Makoto takes the leading role in the first one. We already know from his interview that going to sushi is a special treat for Makoto and California rolls are his number one favorite food. So he will order a couple of those for his lunch.

But first, Makoto asks for hot green tea and a glass of ice water. He only sweetens the warm tea a little bit. If the restaurant doesn’t have honey, which sushi places usually don’t, Makoto’s second choice is raw turbinado sugar, and failing that he adds a little plain sugar, just enough to make it a little sweet. After stirring, he adds a couple ice cubes and drinks his green tea at just the right temperature. For an appetizer, he asks for enough edamame to share with his friend Michi.

MICHI: PROTAGONIST IN THE NEWEST OF MY FIRST KARATE PICTURE BOOKS

The first thing Michi orders is iced tea, sweet tea if they have it. When they don’t, she sweetens it herself without any fuss, just some sugar. Michi loves the miso soup which comes as an appetizer without even having to ask. She also enjoys the delicious salted edamame.

Laziness and Procrastination stay far away from the edamame. The salt granules turn them off from the beginning. And when they see that you have to put effort into popping the green soybeans out of their shells, well that’s just too much work for them to eat.

Michi is not very familiar with sushi, but she’s up to try new things. First she tastes one piece of Makoto’s California roll and says it’s yummy. She also enjoys a couple bites of each of the spicy tuna roll and tiger roll. They are pretty full after all of that, but both Michi and Makoto finish off their meal with a very slightly sweet tamago nigiri. This mildly flavored Japanese omelet sits on top of a rice ball, wrapped with a strip of nori seaweed. Tamago means egg and nigiri means served on a dollop of sticky rice.

Did this leisurely lunch with the main characters from my karate picture books make you hungry? Here are some of my favorite sushi places in the Phoenix, Arizona east valley area: House Sushi, Masa and Sekai. And in the greater L.A., California area, Hayato is awesome.