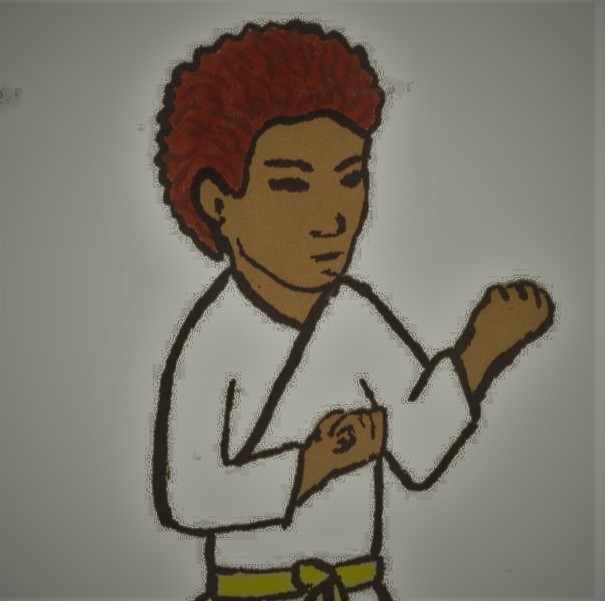 Makoto, the main character in my first children’s picture book, likes to keep things light and fun. Which is not unusual for a nine-year-old boy. He has a Japanese name, but he’s American. Today we get to find out about 10 things in Makoto’s room.

The biggest thing in Makoto’s room is his bunk bed. It comes in handy when friends or cousins sleep over. Makoto usually sleeps on the bottom bunk because it is cozy. But sometimes he likes to mix things up and sleep up top.

Makoto has a few colorful belts folded in half and hanging at the foot of his top bunk. It started when he was a white belt and kept his belt there so he’d always know where it was when he went to karate. That was before he had a gear bag.

One shelf of his small bookshelf is full of art supplies. That includes a few different sizes of sketch pads and sketch books, construction paper, pencils, colored pencils, crayons and a tin full of colored markers.

Makoto has a large tub full of Legos® building blocks which he uses for hours, even days at a time. He likes making buildings and when he has a lot of free time, he’ll build a whole city.

The inspirational poster below is on his wall. If you have read “The Can-Do Karate Kid” you may know how Makoto learned this lesson.

On his bed, Makoto has a soft stuffed animal that his parents gave him for his birthday. It’s a dog, his favorite animal.

In Makoto’s closet, his red backpack for school hangs on a special hook. Red is his favorite color.

Next to his backpack, there’s another special hook for the bag which holds Makoto’s sports stuff. This large mesh bag has a basketball, a foursquare ball, and a few badminton rackets and birdies.

On the floor of his closet, under these hanging bags, sits Makoto’s karate gear bag. This duffle bag has two short handles. Inside it are his sparring gear and his dojo student handbook as well as a small notebook which has some kanji that Makoto wrote in it.

There’s a small laundry basket overflowing with clean clothes. It’s Makoto’s job to hang these up in his closet. Like us, he still battles regularly with the Laziness and Procrastination monsters which he defeated in “The Can-Do Karate Kid.”

Nobody’s perfect, but like Makoto we can continue to strive for victory over ourselves, even when we fall into being lazy or procrastinating. For more fun and getting to know Makoto, here’s what he said in an interview.

Bob’s Advice for Kid Who can’t have a Dog