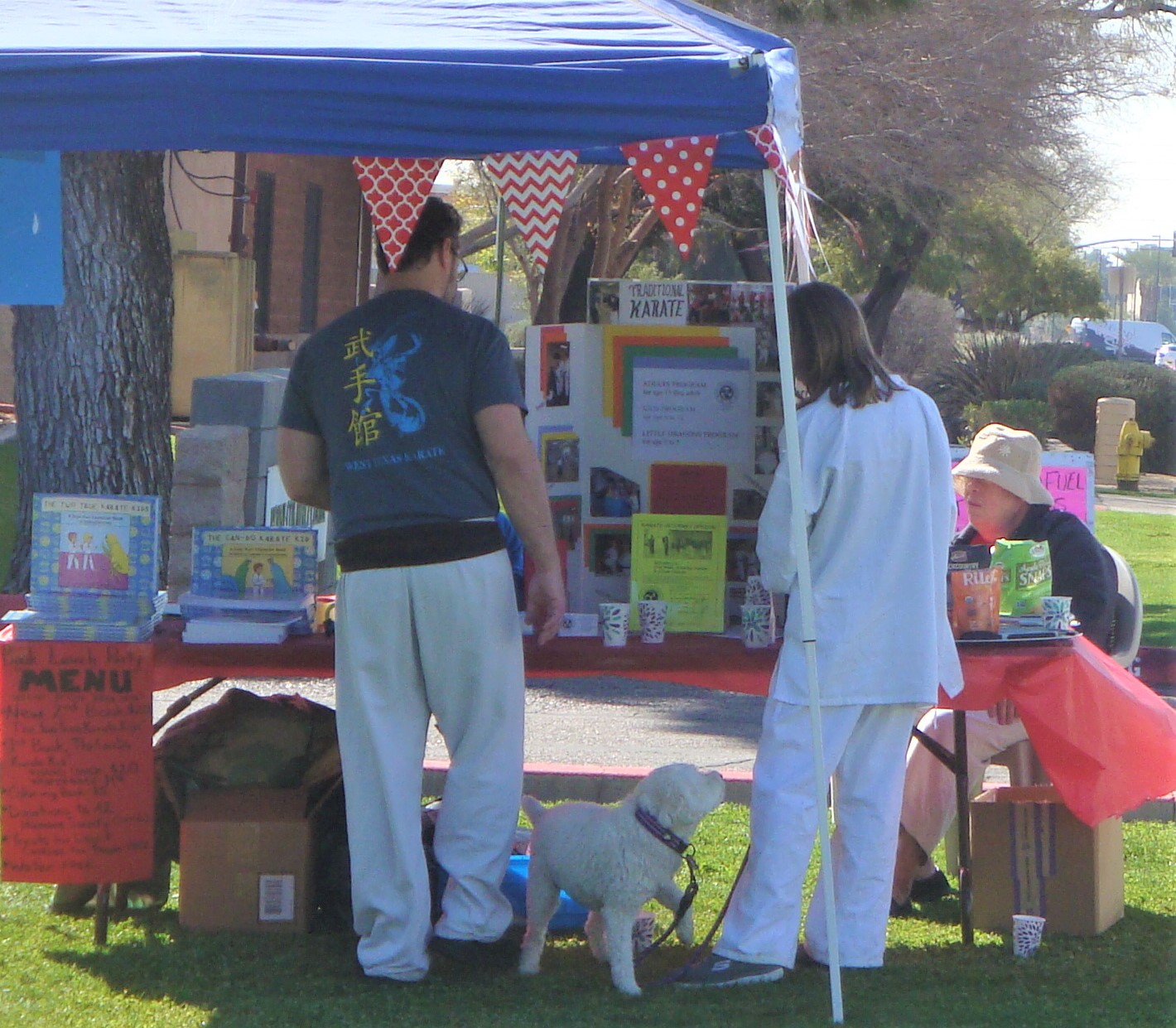 My second children’s karate picture book, “The Two True Karate Kids,” has the adoption of a dog as an important part of the story line. So for the book launch party earlier in the year, we held a special outdoor celebration that included a Karate Class with Your Dog. I have already had kids asking me if we are going to do this again. It was a lot of fun, so I’m sharing some karate with dogs pictures.

This was part of my book launch party, so we had a booth with my books and also some information about the karate classes that we teach. My co-head instructor and husband helped our dojo to sponsor and host this event. We enlisted the help of dojo family members and friends. The weather was perfect, as we’d hoped, for the time of year here in Arizona.

Fun in Karate with Dogs

Many very nice and friendly, mostly small dogs came to participate with both karate students and non-students. In the karate class with dogs we encouraged them to go through an obstacle course. At the end they could attack a teddy bear. (Most dogs didn’t do the last part, but everyone had fun, including the pets).

This beautiful pup (pictured above) learned to go up the ramp.

Many volunteers helped with the obstacle course. You can see me encouraging and guiding them to help customize the course to the abilities of each pup. Similar to karate, we may modify our teaching methods and what we encourage students to do in class, based on their age and physical abilities.

This cutie was our smallest participant, but she proved very capable of participating fully in karate with dogs. That’s another thing I have seen from young karate kids over and over: don’t let their small size fool you, or even age, many young and small students have succeeded in traditional Okinawan karate.

Everyone at the event enjoyed making new friends of both the human and canine species. Happily, the dogs were tolerant of each other and I didn’t see any teeth bared nor hear any growls.

This medium sized pup was the biggest one doing karate with dogs. She was also the one who thought about attacking the teddy bear at the end of the obstacle course. But even with our coaches’ encouragement, that was short-lived.

This was our youngest dog participating: the equivalent of our Little Dragons karate program student. He didn’t catch on easily to what we asked him to do, but had a good time anyway.

Karate with dogs was a great way for our child students to practice their positive leadership skills. Here, they are encouraging the young puppy to go over and under the padded sticks.

At the end of the karate with dogs class portion of the event, I presented each canine with a Karate Dog Certificate.

To finish the event I did a live reading of my second karate picture book, with both dogs and people in attendance. We all had a great time. It was planned to only do karate with dogs this one time, for the launching of my book, but we’ll see…

As it says on this linked website, knowledge is power. Here is a short article on dog care to help with being an even better dog owner.

2019: A Picture Collage of Highlights