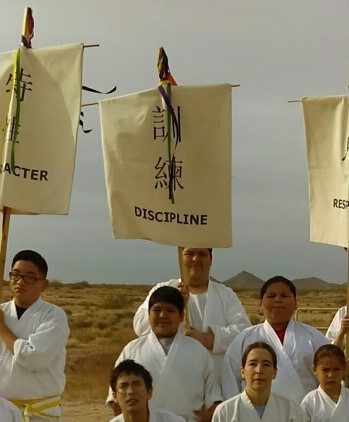 As I remember it, the first time I ever heard the word character was in this phrase, “It will build character.” My dad said this many times. Other adults did too. They usually used it in response to someone mentioning concern about a difficulty. For example, “Yes, I want you to rake the whole backyard by yourself. It will build character.” I could infer that it might have to do with perseverance. Or maybe courage. But, I still wondered, what is character?

That is an excellent question. It doesn’t have an easy answer. If you look up the meaning of the word “character” at Merriam-Webster.com, you can find eight different definitions.

In karate, we are interested in building a couple kinds of character. Such as, definition 1a of those mentioned above: one of the attributes or features that make up and distinguish an individual. E.g. “This is a side of her character that few people have seen.” As karate practitioners, our uniqueness is appreciated. And we are encouraged to stand out and distinguish ourselves with courage, excellence, respect, etc.

But the most frequently used phrase in our style of martial arts is Dojo Kun number one, “Strive for a good moral character.” Translated from the original Japanese, it is specified that we encourage moral character. That matches more closely with dictionary definition 3 of those mentioned above: moral excellence and firmness. So the next question may be, “what is moral?”

Moral also has several different definitions. But most of those are similar to each other. Basically, moral has to do with right and wrong, or with ethics. That circles us back to the original Japanese Dojo Kun. The words that were translated into “good moral character,” were basically, “the completion of human standards.” That is interesting, given that the Merriam’s first essential meaning of moral is, “concerning or relating to what is right and wrong in human behavior.”

Issues of ethics can be as easy as following the strong feelings of one’s own conscience. Sometimes in life our conscience directs us, loud and clear. But for me, daily life can confound and confuse. Just look at the many different meanings to consider. Also consider all the gray areas of life.

It is so important that we learn about good moral character. And that we become versed in right behavior. The younger we learn this, the better. But it’s not too late, even for adults to learn. Karate’s Dojo Kun spells it out into five basic concepts. They are moral character, honesty, perseverance, respect and self-control.

If we learn about these five concepts, think about them and uphold them, we can use them to improve our own life. And the lives of our families. Family members greatly appreciate the behavior encouraged in the Dojo Kun. The concepts are like a compass, guiding our conscience. I write Dojo Kun Character Books to help children learn about and implement character-building in their lives. I aspire to help kids answer the question, “What is character?”

Gardening with Laziness and Procrastination

I Respectfully Wish You the Opposite of Trouble

From the Archives: Fred McCready Learns to Say Yes