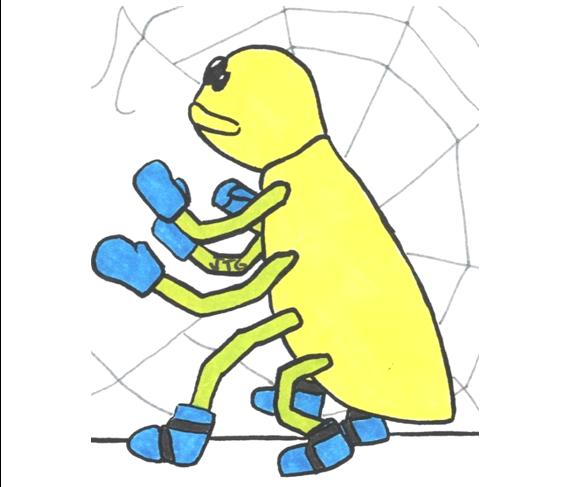 Dishonesty is the name of the antagonist in my new children’s picture book, “The Two True Karate Kids.” She is depicted as a yellow and green spider monster that changes sizes. Not seen in the book, here’s a picture of Dishonesty as a Baby.

Isn’t she just a cute little thing? I think she’s about as cute as spidery guys get. Dishonesty, as a baby, starts to creep over young children. That is typically when kids start lying. And because of Dishonesty’s tangled webs, children typically lie even more as they get older.

But with the support of parents and other positive mentors, children can learn the value of honesty. They can learn to walk on the path of truth. And as our karate Dojo Kun says, we can even learn to keep or guard that path, as truth warriors.

“The Two True Karate Kids” book (available here on Amazon) is a great tool for reinforcing honesty in children, in a fun, non-preachy story. The article linked above, about dealing with kids’ lying, says that it helps to talk with children about the importance of honesty. My second Dojo Kun Character Book is a great way to start that conversation, and to reinforce honesty as well as other positive character traits. You can see a short overview of the book here.

Butterfly Poem & This is Buggy

Haiku & Poetry for Appreciating the Moment