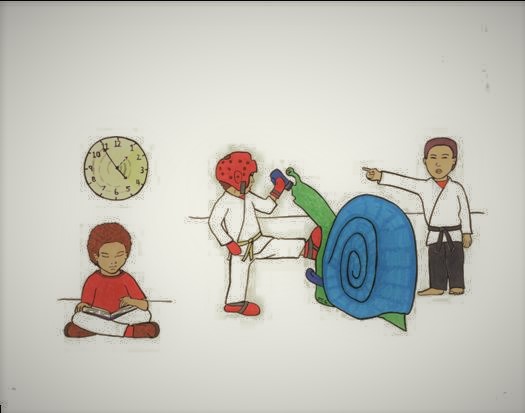 My children’s picture book illustration and writing continue to supply me with adventures. Here is one I’d like to share with you from early this year. It’s just a tiny part of the journey of my first Dojo Kun Character Book. This is the development of one page from the book. In it, the main character, Makoto, is reading his whole reading assignment right after he gets home one afternoon. That is shown on one side of the picture. On the other side, you see him sparring with a big snail which is Procrastination. Makoto has changed and no longer procrastinates by putting off his school work. Here’s an early draft:

Mel, one of my art editors and advisers recommended switching the two scenes to allow the illustration to flow better:

I thought it was done at this point, so I added color:

But after more input from others and my own consideration, I knew the picture needed more work. Around that time I took an interesting side trip on this children’s picture book illustration adventure. A Facebook friend mentioned medieval knights fighting snails. I liked this invitation to learn something new. Why did knights fight snails in manuscript illumination?

Then it was back to working on my children’s picture book illustration. Mike, the junior black belt referee in the illustration, looked like he was getting in on the fight, so I moved him further away from the melee.

But didn’t it still look like he might be smacking the snail’s shell? I adjusted Mike’s arm and made him pointing to better show that he was giving a point to Makoto.

A little more input from beta readers resulted in the addition of clocks. I liked the layer for learning that this added for young readers. Here’s the picture with clock and color added.

The final children’s picture book illustration is brighter and clearer in the book, which is now published. It’s “The Can-Do Karate Kid” and you can learn more about it here.

Karate Picture Book in the World

Scrapping with Disrespect and Trouble to Make a New Picture Book