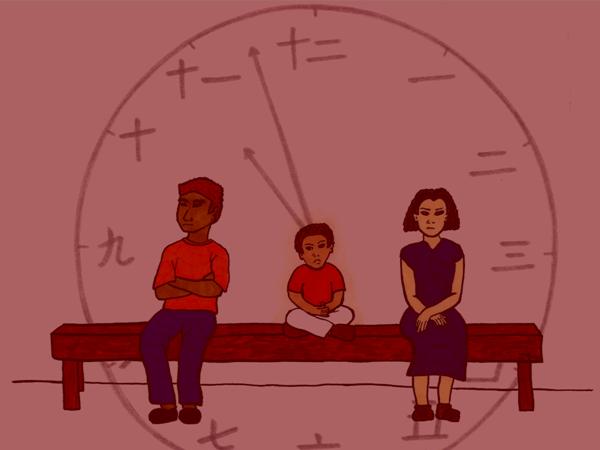 In the above picture, the dotted lines symbolize all of the voices, words and messages that Makoto, the boy, feels are buzzing around him. The snail is Procrastination and it symbolizes that Makoto feels like just putting things off. But Mom and Dad are not going along with that plan in this scene.

The reason I picked a snail to symbolize procrastination is because he’s willing to do things, like to get somewhere. It’s just that his big, heavy shell makes him slow. Similar to when we aim to do something, but wait and put it off until later. That’s when we procrastinate.

Here is Procrastination with his friend, Laziness. I picked the slug to represent laziness, mostly because slugs move very slowly and they just look like lazy lumps. You might notice that he’s technically not a slug, but a slug monster with arms.

I wanted to have monsters representing the negative character traits in my books. That’s how the illustrations popped into my head. But I didn’t want them to be scary because some readers may be very young. So I based the monsters closely on critters we may see in everyday life. The negative-character-trait monsters in all of the books change sizes. They become bigger when they feel powerful.

The superimposed clock is symbolic of the feeling Makoto has while being very aware of time. On the one hand, it feels it’s going slow because he is on high alert. He may be in the biggest trouble of his life. On the other hand, time’s going too fast for his comfort. That’s because as soon as his dojo mates are done testing, he is going to have to have a talk with his karate teacher. He dreads this.

In this picture, Makoto feels like a bug under a magnifying glass. This picture of him being so small is complete picture book illustration symbolism. I think most kids have an experience like this, with parents, teachers or other adults looking at them critically. Makoto knows he did something wrong to gain their criticism. He also wishes he could shrink down to the size of an insect and scurry away out of sight.

Makoto Claims the Power in His Life

Finally, Makoto claims some power in his life! He is determinedly getting his reading done. The picture book illustration depicts the fight scene where Makoto beats Procrastination. He’s breaking his bad habits. He’s no longer putting off his homework. Also, the junior black belt Mike, is awarding a point to Makoto for getting a strike on Procrastination. Mike’s action here symbolizes the support that karate students have from their black belt instructors of all ages.

Who hasn’t had this symbolic struggle in bed in the morning? You know you have things to do. But Laziness and Procrastination come along, larger than life, ready to put up a fight to make you stay in bed. Just a little longer… Laziness and Procrastination were there with me this morning! And they even got a point or two on me. But then I followed Makoto’s example, showed them the door and got up to take the dogs out before it got too hot today.

Exploring and Teaching: What is Character?

2019: A Picture Collage of Highlights